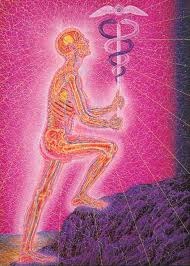 The new book now gives me a base for more articles about metaphysics and vibration, and just as the book was aimed to use the minumum words for maximum effect, working with vibration is very similar: minimum effort > maximum effect.


It would be all too easy to again dissect the latest surrounding the IMF, chemtrails, control, numerology in media news, etc, but we all know it is an attack on our electromagnetic vibration no matter what fancy dress outfit it comes to the party in.  Is it worth us looking at another 50 vigilant citizen articles (though intelligent and well formed) because you know it?   There is nothing more to gain,  you know it, so integrate it, move on, and use the knowledge for something positive for the self.


I was going to look at the paradox of the students in England protesting at the system because they really want to be in the system, but will leave that because it is too silly.  There is no money left, so kicking things won't help, nor will a degree help in materialising inner balance within a falling economic system based upon mistrust and competition.


I will though mention quickly my opinion regarding Wikileaks.  Surely this a CIA operation as a way of shaping the world political map?  This weeks release was like a release of a Hello magazine, the world media was completely synchronised and pushing it, nothing was really revealed, but more focus is now upon the middle east and Iran.  It looks like controlled opposition to "mainstream news," and it first gained its credibility by showing videos of US torture in Iraq - something everyone knew about anyway!  Make your own mind up, but don't believe anything straight away, and I am not the only one with this opinion, see here, and here.  It's like this, the collective consciousness now is starting to know that the governments lie, and that more is going on that what appears, therefore the elite create a "catcher" for this, something that appeases the curious mind, "oh I heard about those conspiracies, that Wikileaks exposes them doesn't it" is now a mainstream view.  It is like the elite place a chess piece to stop further collect conscious intrusion, like placing a pawn in front of a pawn.


Make your own mind up, but always be wary the wolf in sheeps clothing. ***
I wish to look at some simple "self" solutions, because after whizzing around the washing machine of truths, sooner or later we realise that what we can really tangibly do in the now is improve our own vibration.  After much thought on this matter I would say it is probably better to improve your own vibration 5% than to splatter information in the faces of 10 people who realistically, have a level of consciousness that would rather be buried in family photos, local events, or aunty Maltida's hip operation, rather than face the inner death and inner wobble of realising what is really going on in the five sense reality (let alone on the more subtle planes).


But when we look to rocket up our vibration, there are minefields of profiteers, charlatans, and rainbow new agers....arrghhh, it's a mess.....hence most go down the pub.


We could look to yoga, but that is a little messy these days too; often aimed at the worker to "de-stress," and swanky (should I remove the 's'?) expensive parlors with the handsome teacher etc.  yuk.  The schools in the west are also very feminine in energy and turn many off.  I was chatting with someone not long ago, and he was like, "I did 2 hours yoga today and feel great"....good for you I thought, a little self indulgent on the time, no?  I want 10 or 20 minutes of time invested and a big return.  Yoga asanas without mudras, bandhas, or pranayama is just stretching anyway, and as Franz Bardon said in the legendary "Initiation to Hermetics" you only need a bit of stretching to keep the body limber and flexible as a base.


In yoga classes you have to move from a posture you like and feel that you need because someone told you to, and someone is speaking most of the time - this alone keeps you in the "external."  The words said by some teachers are 80% about asana (physical postures) and little about where to place your consciousness or any energetic alchemy.

***
Anyway, enough of that...I play with some respected techniques, I try some out, keep some, and always look to minimize time but to maximize effect, and I think I have 3 simple techniques that you can do alone and that you will ALL fly from.  Each take no more than 15 minutes!  Remember, it is better to do something that raises vibration for 10 minute with 100% intent and focus, that to do something for 5 hours with 80% effort.  Of this I am sure.


These techniques are ancient, used in mystical and esoteric circles, and come from different parts of the world....you don't need a £30 mat, swanky flowing "I am spiritual" clothes....and each have a bit of "warrior" about them.   Most important of all, the attack on your vibration by the powers that be will bounce off you akin to Batfinks "wings like a shield of steel" because your vibration will be razor sharp.


a)  Kuji-in   b) Kriya Pranayama  c) Vowel Mantra and Visualisation.


I almost included "The 5 Tibetans" but this takes about 20 minutes...too long, sorry.


Out of these, maybe pick one that resonates with you and go with it for around 11 days.  I say this as you probably won't feel a vibrational change during this time, this is why many esoteric techniques are "occult" - the benefits are hidden from the profane.  Most want results NOW, and it just doesn't work like that.  Did you get mind controlled by the system in a day?  No, it took years.   You may feel like a lemon the first few times too, good, get over yourself,  nothing looks as silly as someone watching X-factor, shopping for fashion, or working in a job they hate - bear this in mind.


Known as the 9 seals to Taoists and also used by ninjas, Kuji-in has its roots in north India, though now is used mainly by Kung-fu masters and Tibetan Buddhists.  Used with the Sanskrit mantras instead of the Japanese ones, this can really rocket vibration.


It is basically 9 levels of power / being;
It consists of 9 mudras, each with a mantra, a part of the body to focus on, and a relevant contemplation.  The depths of this are deeper than the mines groups of 33 keep finding themselves in, and I won't go too deep here....I will just show the basics.  Remember not to move up a Kuji until you feel ready, and do a few minutes each day or the build-up will be lost.  We are building up a reservoir of energy.  Note: The mantras can be said internally. 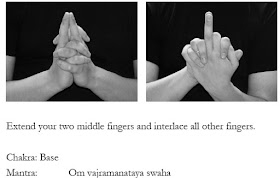 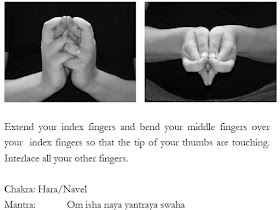 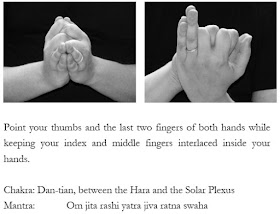 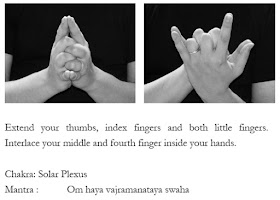 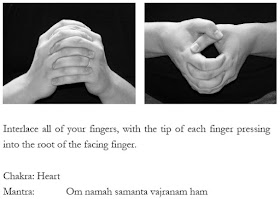 6) JIN   Awareness    KNOWING THE THOUGHTS OF OTHERS 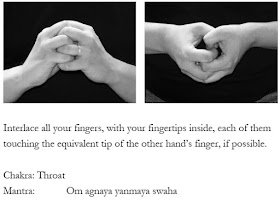 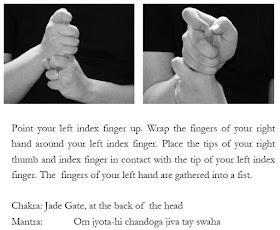 8) ZAI   Creation     CONTROL of the elements of nature 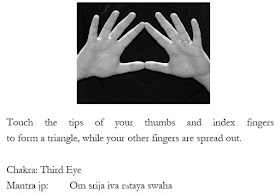 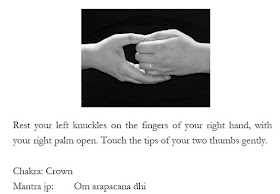 Also, just knowing which element relates to which finger can make this go deeper too. 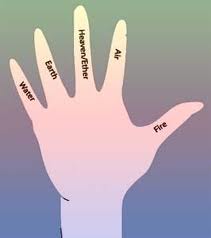 
Kuji-in not for you?  Then give this a whirl (open images in a new tab for full size). 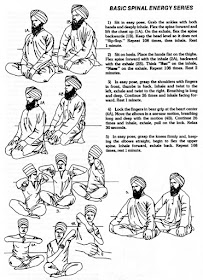 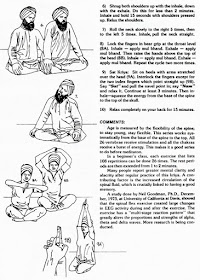 After doing this set every other day or so for a while I guarantee you will be less tired, have more energy, and need less sleep.  Note: You don't have to wear a silly thing on your head to label yourself into a religious silo when doing this, also there is no need to do the inner mantra, it is better to focus on counting the breaths.


What are vowels?  What are sounds?  What do they originally mean?  Hebrew has no vowels, so we need to look to Sanskrit to find the source of vowels and their meaning. 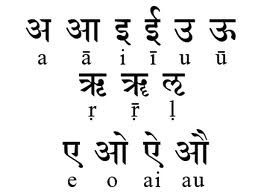 When we as a mantra resonate the vowels all in one out breath in a continuous flow (ee, eh, oh, oo, ah, nn), each with a focus on a chakra, and each with a focus within a "state of being," we can lift our vibration in just a few "goes."


Take a deep inhale and then start focus at the 3rd eye and move down as shown below. 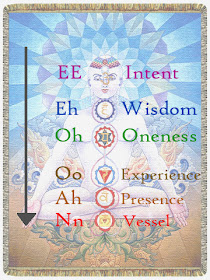 The root Chakra is a NNNnnnn sound, coming from the Hebrew letter, Nun, esoterically meaning "unique within the sea of the all" or "I, the flesh, the vessel."   Then as you are breathing-in ready for the next round, squeeze your perineum (known as the Moola Bandha lock), and feel (and intentionally focus) energy to surge up your spine.


This is a fractal of how ALL things came to be from creation, from Ain, from Shiva (call it what you will):
>intent > wisdom > oneness > experience > presence > uniqueness.


With the deep ingrained knowledge of vowel meanings, all mantras and ancient words make much more sense, even basic words will gain more meaning because you will be more aligned with the root sounds and meanings.

From any of these, wisdom will soon come, not from a book, not from a 6 minute glitzy youtube video; wisdom from the self.  Talking of wisdom, I saw this recently and it is dripping with wisdom - a movie about the mythical hermit buddhist masters in the Chinese mountains and what they get up to.


This whole article is really all about freedom, but the message of freedom is hidden, just as it is in this amazing video by Sigur Ros.


All we need to do individually is raise vibration and then this elite nonsense paradigm we live in will fall apart because of the frequency it exists upon will then be left behind.  This is the only way, because asking politicians to change policy is still upon that lower vibration.  If we concentrate upon the journey of our soul all else will look after itself. 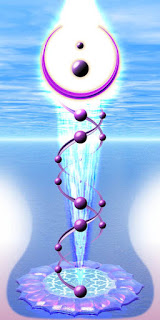 
ps The first external review of the new book is here and thanks for all the comments so far :)
Mark aka waykiwayki at 13:53
Share