Not much to report....i'm pretty much "over it" this week......so I had a feel for the coming spring air instead - the ice is melting, and the almond blossoms are out, i decided to take a closer look.

Egypt: The First Domino or Puppeteering?

All looks kinda nice - the Egypt revolution, people from all classes and ages on the streets saying enough is enough, it is hard not to get swept up in it all and "be on board."


The following pics capture our imagination and deep inner desire for fairness, and link to the archetype to "fight for what is right" - that we ALL have within us. 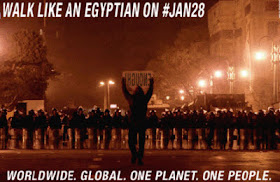 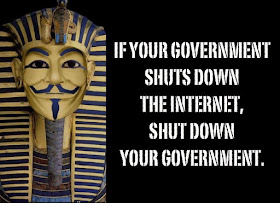 Watching people power "taking back" their lives feels good......but is this really what is going on?  Is this the first domino (the Yemen, Jordan, Sudan, and dare I say India) are looking like they are the next dominos) in a global awakening?  Nazi robot leaders in China have deleted the word Egypt from the search engines so none of the mind controlled get any ideas of deprogramming themselves and actually having a say.
Or is this all more controlled chess from higher powers?
Some facts:
So yes, it all feels good, and we are all against oppression, but are we just seeing a puppet swap here to further the elite's agenda?   Cynical?  Well watch John Perkins, a self proclaimed economic hitman that told all about Guatemala, Panama, Iraq, Cambodia, and other arranged protests,coo's, and government changes here.


Anything that goes on at this level with this much media involvement usually has the hidden hand behind it.  But this also puts "revolution" into the collective consciousness so there is some gain there.    And also even though the internet only went mainstream just a small 12 years ago, it can create mass movement very quickly, this is a major thing to note in our species evolution.
In my stretch of time alone with the Emerald Tablet I saw many cities in chaos and feel an inner knowing that this is the first of many.  In all of this I feel sorry for the riot police defending toxic establishments with violence against strangers - their programming is so deep that there is no hope for them in this carnation unless they go for some serious healing....maybe they could start here.
What we see in Egypt with the people revolting will never happen in the UK due to the big brother agenda the past two decades; CCTV and databases will ensure people are kept in fear from revolting, but then again not much of the populous there even know about the covert oppression going on.
What is really going on in Egypt?   Do you know what, it is almost impossible to tell, but one of the best ways to try and find out what is going on in the collective consciousness is not to read bundles of media, or get into group think paradigms, but to go deep into the great work, for true, pure, uncorrupted information exists deep within.
p.s Don't worry about all of this because more important things are happening like a lout footballer who breaks jaws, glasses people, and attacks women was purchased for $50,000,000 yesterday......and this money comes from the children and men who have been mind controlled into idolising him.
ok, so it is all going mad.......but we can still just breath and appreciate all the goodness.
Mx