This is an article that has been in my mind for a while, but have only just got round to doing.   The re-invented TV series BattleStar Galactica finished it's fourth and final season last year after achieving a massive following, and within this franchise was some astounding occult symbolism.

First off we have the Pentagon building where they tested the Cylon models (destructive machines that evolved into twelve human looking multi-models - eager to wipe out humanity). 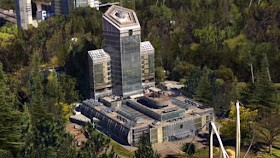 The same shaped pentagons are also used in other episodes, for example in the 'Temple of Hopes' there are 5 pillars representing the "final 5 cylons," in the shape of a pentagon (from above). with each pillar having a pentagon face. 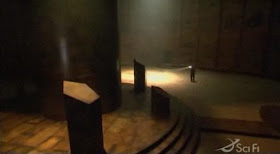 The Pentagon is a symbol that, in itself, is steeped in alchemical and mystical symbolism throughout the ages. We are all familiar with the “Four Elements” of the old science of alchemy – Earth, Air, Fire and Water. But there is a “Fifth Element”, also referred to as “Fifth Essence” or “Quintessence”.

Anders, one of the characters with the most morals, becomes a water based cylon hybrid and taps into a higher more collective consciousness.  At the end of the last season they all decide he is going to "fly into the sun" (to destroy the fleet) so a rebirth of sorts can occur within the civilisation.   As he flies into the sun he says something  deeply occult, also synonymous with Tipareth:

Very alchemical, and also if we look into Jim Morisson, Elvis, some other celebrities, and how the sun god was portrayed in legends; death in water was rife.

Modern philosopher and researcher, Michael Tsarion once stated, "Pisces may be described as the sepulcher of the zodiac, or likened to a great undulating abyss or alchemical cauldron where the other twelve archetypes come to die, co-meddling in the protean waters which dissolve their identities."

Gerald Massey, author of "Egypt: Light of the World" stated, "The deceased assumed this form to cross the waters in the netherworld."

Erich Neumann, author of "The Great Mother: an Analysis of the Archetype" stated, "The plunge bath in Christianity became the baptismal bath of transformation that is a return to the primordial egg of the beginning."

In the Bible, Psalm 69 we read "Save me, O God, for the waters are come in unto my soul. I sink in deep mire, where there is no standing.  I am come into deep waters, where the floods overflow me."

Melito of Sardis, a second century theologian stated, "He comes forth strengthened out of the depths, a new sun, and shines his light upon men having been cleansed in the water."


***
There is much more occult and esoteric symbolism too, and many words of cyclon model 1 (of 12) are deeply esoteric, see below.


***
One of the main characters within the franchise was Cylon model 6 (of 12).  She was nearly always dressed in red, and was often a vision and a voice within someones head, a someone who was weak willed and a slave to his ego and lower desires  (Gaius Baltar). 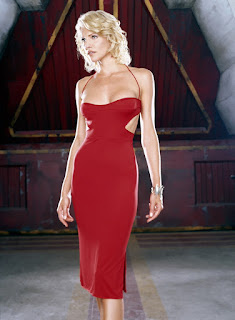 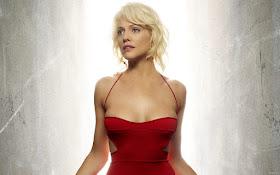 The lady in red is a deep esoteric archetype, also used in "The Matrix."   What does this actually mean?

One constant quote through the series is "This has all happened before and it will happen again." 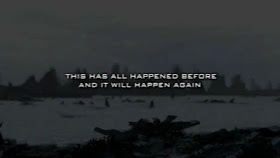 At the very end of the last episide of the last season we see "the lady in red" and Gaius in the future, within another cycle and talking of cycles - this is also deeply esoteric and relates to much thought within the mystery traditions.

On another note, I recently come across these two great books from about  a century ago, and they both beat modern spiritual books out of the water,  With the Adepts - Franz Hartmann 1910 and Rosicrucian Cosmo Conception - Max Heindel 1909.