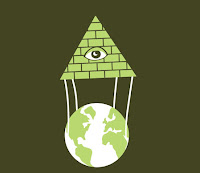 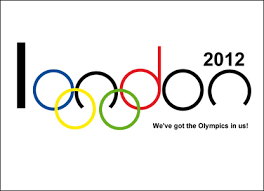 In my new book there are some utopian visions and projections, and ways humans can live in a harmonious structure in the future.  But alas, it's now back to the more objective grind of the blogs and today's issues.


For those that think ritual (or human sacrifice) does not occur on a mass scale, or with members of parliament and governmental bodies, I urge you to watch this.  So many think the law, justice system, and high society politicians are all there to help the people, and to turn this one around internally can commence an awakening.


Awakening does not just come from yoga and meditation as some people believe, some do lots of yoga, have tons of money in the bank, pay tax, and stay clear of any documentaries with "tough truths".....enlightened or self indulgent?   You decide.


If you feel a bit startled after that, then splash some lavender on your crown, have some sage tea, or throw some Himalayan salt in your bath.....if you read this sentence before watching the video and are now not keen on watching it, click x, and move on to some fluffy new age site that makes you feel good temporarily, and carry on ignoring many facets of the reality around you.  Fall deep into the controlled trap that anything "negative" to you is to be avoided.  Leave the real issues to the big boys huh and carry on championing that sugar is bad for people......nice and safe.

***
The Olympics is absurd, but the important factor is that many people are locked into one thing worldwide, and this creates a pool of energy ripe for extraction and use.  To watch people run and swim and throw things is complete folly, no-one stops their car to watch a jogger, run to the sea shore to watch swimmers, follow hunters around to watch them shoot, but the Londoner's who think everything that goes on in the world is in the free Metro newspaper are buying tickets to "be part of it."   Paying money to watch silly walks?   Not for me.

Rik Clay showed much symbolism about 2012 Olympics, just before he strangely died, most notably the biblical names of the roads, and the logo. 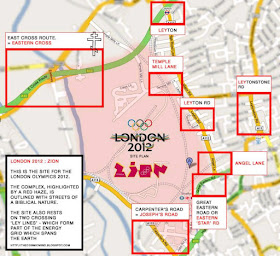 Immortal spirit of antiquity
Father of the true, beautiful and good
Descend, appear, shed over us thy light
Upon this ground and under this sky
Which has first witnessed thy unperishable fame
Give life and animation to these noble games!
Throw wreaths of fadeless flowers to the victors
In the race and in the strife
Create in our breasts, hearts of steel!
In thy light, plains, mountains and seas
Shine in a roseate hue and form a vast temple
To which all nations throng to adore thee
Oh immortal spirit of antiquity!


Since Rik's departure, more symbolism has come to light, but first let us look at symbolism/strangeness from recent Olympics opening and closing ceremonies here and here.


Even the Beijing Olympics had Zion within the logo.

Let us add that in the past, the Centennial Olympic Park Bombing had 111 injured, and the Munich Olympics' 'terrorism' had 11 killed by a group called Black September.


Back to the coming Olympics, they added two alien looking mascots each with one eye, and if you don't know the symbolism of the one eye I suggest vigilant citizen or google, a few minutes, a chair, and a cup of tea. 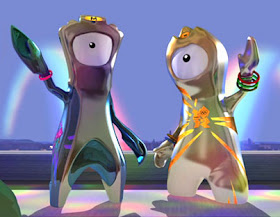 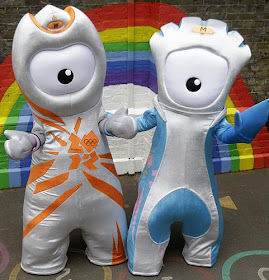 
Meaning of Wenlock and Mandeville:
In Irish, the name Wenlock means- "from the holy monastery." Mandeville means “great town.”


The stadium also has pyramid floodlights with the actual light in the capstones.


***
The Opening Ceremony in London will commence with the ringing of a massive bell  (Bells were used to communicate to people 'en masse' - or for ritualistic, religious gatherings, or 'mass.'), inscribed with a line from Shakespeare's The Tempest: "Be not afeard, the isle is full of noises."


Here's the quote in full from Shakespear- read by Caliban - Act III Scene 2:


“Be not afeard; the isle is full of noises, Sounds, and sweet airs, that give delight and hurt not. Sometimes a thousand twangling instruments Will hum about mine ears; and sometime voices, That, if I then had waked after long sleep, Will make me sleep again: and then, in dreaming, The clouds methought would open, and show riches Ready to drop upon me; that, when I waked, I cried to dream again.”

In ‘The Tempest’ the character Caliban is said to be a hideous, monstrous being - a representation of - part fish, part beast, part man - the ensuing result and offspring between his mother, - the witch Sycorax and the Devil himself.

Additionally, scholars believe that the character's name Caliban is said to be an anagram of the word cannibal.Here's a couple of depictions of Shakespeare's Caliban. 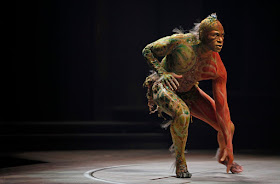 Techno group, drumroll....Underworld with be the star performers too.
The event is on 27July at 21:00 BST (3:3), and also people in the stadium will be entertained from 20:12.
Up to 900 children, aged 7 to 13 (prepubescent), from the local Olympic host boroughs are also set for a starring role in the London 2012 ceremonies.

***
Security is massive around the Olympics:


Even this week, a "hostage situation" in London occured where a man threw stuff out of an office window (probably staged, look at the frustration this places in office workers' subconscious minds).  This caused the new "Olympic ready" type of policeman to come to the scene, with no id or face! 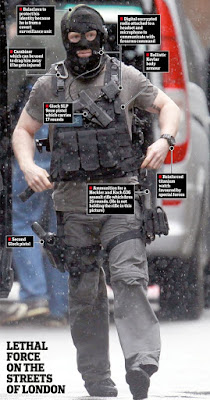 They are even planning surface to air missile on the roofs of flats, and as Iran are boycotting the Olympics due to the 'Zion' logo, the elite will know who to blame.


It is also worth noting the tallest building in Europe will be completed just before the Olympics, in London, and is pyramid shaped.  This may be a Talisman for the nearby Olympics mega ritual.

The BBC recently moved its offices to Manchester, and Private Eye last year had this on the front cover after the London riots.  Why? 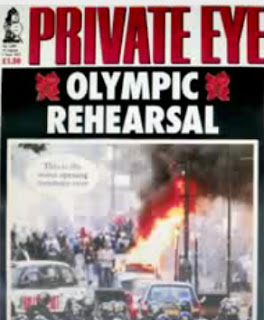 To push things a bit further, and maybe adding one and one to get three, but in the film 2012, when the devastation is happening, for no reason whatsoever, a man (not even in England) picks up a map with the London Underground logo on it (for about half a second).  Why would the Director do this amidst the carnage? 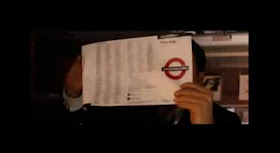 And in V for vendetta, another half second clip shows a terrorist strike on the London underground.

In 2010 author David Cain (real name David Thomas) wrote a short story in a newspaper about a bomb going off at the Olympic stadium.  Why change his name to Cain, which has links to the bible.

***
More symbolism is here and here, but out of all the surrounding quagmire, this stood out for me.   Wowzers.


I believe with London being the illuminati and finance HQ's, and all the symbolism and psy-ops around 2012, I predict one or more of the following:


Something comes to create lawlessness / chaos.
False flag terror attack in London.
Large man made event that appears to be natural.
Madeline Mcann's body found (to bring in microchipping children).
Nothing (unlikely).

I advice staying well clear of London, the logos, hype, and ALL media around the Olympics, each could open one up for some level of energy extraction.


More exciting than watching the synchronised shooting coxless rowing (or whatever of the thousands of silly events), is to watch this image. The energy being returned is much more favorable. 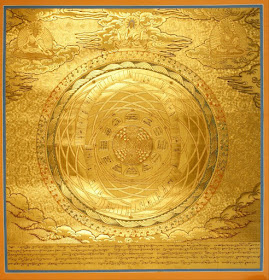 Podcast with Aaron Franz from www.theageoftransitions.com about my new book, evolution, transhumanism, and its parallels to his (amazing) work.  Listen here (or right click and download).  Alternatively, one can watch the you tube video below.  Be sure to check out Aaron's work.