Here's a concept from a short story I'm playing with, but decided to share it in a blog as it fits with what the 5th November represents historically.

People say one can't do anything about the system's corruption, control, and lies, and to walk away and not feed it......something I agree with - but there is actually something one could do to speed up change / the end of this cycle.

Note: One may think this article is anti-system, but in reality it is a corrupt and greedy system that is anti-humanity and anti-earth.

Symbols hold energy, and are the currency in the astral/inner worlds.   One look at a symbol, sigil, or logo, and feelings are roused.  Symbols also exist deep within the collective consciousness of humanity.

The short story in development was seeking a symbol that could.......

I managed to pluck such a symbol out of the ether for the story, and plonked it into being with 5 simple brush strokes  - simple but deep with meaning. 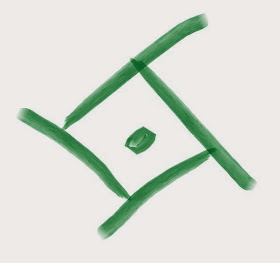 It looks like an eye awakening.
It can be spun anticlockwise.  Anti-Clock (status-quo tick-tock) Wise.  The alternate way to the norm.
Whatever way the wind blows, it still spins Anti-clockwise (unmoveable in its meaning).
It contains two letter 'T's  (Truth).
It contains two letter 'F's  (Freedom).
It contains two letter 'L's (Love).
When spinning it symbolises a heart chakra.
The dot in the middle is the self; I have a voice, I have the right to disobey.
Shaped like a diamond: hard to break, but also beautiful.
It looks like a man spinning from above - creating space for the self from oppression, lies, and propaganda.
Green is the earth, and also the Sephiroth of the Qabalistic Tree of Life meaning "Victory in splendour," a nature based Sephiroth representing ITmore feeling and emotion than others.


In the story the symbol starts to appear everywhere (graffiti, around cities, on CEO's cars, billboards, banners, stickers, public transport etc) as more and more people get on board with the simple philosophy of seeking positive change and irradicating toxicity.   Change ends up being brought about without talking, voilence, or marching, just simple use of a simple symbol.